How AI Will Change The Way We Work

Beyond specs, agile, mobile, AI is the next disruption. Going forward, you’ll need to teach technology.

Artificial Intelligence, specifically machine learning, will likely cause a more significant shift for designers than the previous major design shifts from specifications to agile or from large screens to mobile devices. Designing AI will change the methods, tools, applications, and collaborators. Specifically, AI will bring us into an era of “teaching” technology. When specifying (waterfall), our craft was our limitation. When shaping (agile), collaboration was our limitation. With AI, our capacity to teach will be our primary limitation. We will need to develop new ways to articulate our design goals, such as through the creation of learning objectives and so-called AI utility functions.

This talk introduces designers to AI’s fundamental logic (learning), a few exemplary applications as well as how we might work with AI in a human-centered way. Importantly, as with the shift of jobs, as more work is automated, our design domain will change, bringing our attention to augmented human intelligence and human-machine collaboration. Lastly, designers will be charged with making this technology’s impact culturally positive. 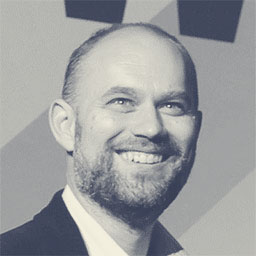 Kristian Simsarian is a leading expert in innovation, design, creativity, technology, and education with over 25 years of experience. His mission is to increase the overlap of wisdom and technology. He believes in the power of creativity and design to humanize, enrich and positively transform the world. At age 25, an international committee of scientists selected Kristian as one of a dozen NATO distinguished fellows in robotics. In the 1990’s because the money for AI and robotics was coming from the military, Kristian moved to IDEO, a firm known for foregrounding human-centeredness and declining military work. At IDEO, Kristian served for eighteen years as a design and business leader, and later advisory fellow, helping build IDEO into the innovation powerhouse it is today. He has helped fortune 100, startups, governmental and non-profit organizations grow their offers, create design teams and scale design for better impact. Kristian holds several patents and peer-reviewed publications and his work was featured in business design books and periodicals including The New York Times, Business Week, Time Magazine, Huffington Post as well as BBC and MSNBC. He focused his career on developing radically new pedagogy, processes, and toolsets for increasing the capacity to humanize technology. Notably, Kristian brought 21st-century STEaM education to design students as founding chair of two California College of the Arts Interaction Design Programs, an award-winning BFA, and a new innovative Masters. He sits on the advisory board of the Berkeley Greater Good Science Center and a few other non-profits.