Fight the Patterns & Battle Your Audience

When the user is centered in your design, how powerful is your message? To empower the user we should not design for the expected, but unexpected behaviour.

In this talk I’ll zoom in to the ability of interaction designers to create powerful narratives by sharing two very different projects, where I felt like I was designing ‘in the wild’. I found the value of breaking out of the existing design patterns and methods to create a powerful experience.

EAT | TECH | KITCHEN is an interactive food installation, in collaboration with food artist Emilie Baltz. Led by the Futurist Bot-Chef (Voice Interaction), guests are encouraged to create unexpected culinary experiences that remix definitions of technology, ritual and consumption. EAT |TECH | KITCHEN presents your online existence on a futuristic platter and reflects on the absurdity (and reality) of how we consume technology. Winner of the IDFA Immersive Non-Fiction award.

JIN is a story of female empowerment in the Kurdish part of Syria. Together with award winning documentary maker Reber Dosky, I’m designing an interactive documentary and installation experience that empowers the audience to raise their voice. 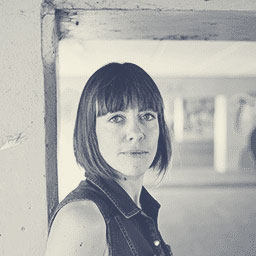 After working over 10 years as an interaction and UX designer at design agencies, technology labs and startups I founded an independent studio in interactive art and design. I design story-based and multi-sensory experiences, often blending on- and offline social interactions and encounters. My work involves mobile and augmented reality experiences as well as interactive installations.